Volunteers planting native trees amid the recently seeded native grasslands. The no-trill drill seeder used by Solano RCD creates rows of grass
seedlings that are easily observable during the first year of growth, but will eventually disappear. 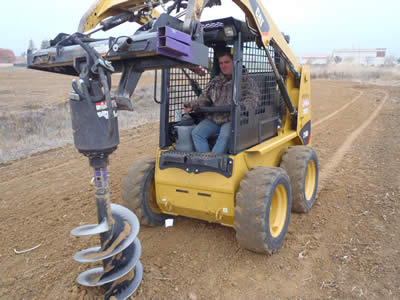 Solano RCD staff auguring planting holes for native trees in Centennial Park in a restoration area that has been prepared for seeding with native grasses. Solano RCD has been working with the City of Vacaville to restore wildlife habitat and improve recreational opportunities in Centennial Park in northern Vacaville. This 260-acre park has 90 acres of developed sports fields in the southern portion of the park, but the northern 170 acres had been covered by non-native annual weeds for many decades.

In 2014, Solano RCD and the City received an Urban Greening Grant from the California Natural Resources Agency to restore the two branches of Horse Creek that run through the northern half of Centennial Park. RCD staff, community volunteers, and students from nearby Markham Elementary School planted thousands of native trees, shrubs and forbs, and seeded 14 acres of native grasses and wildflowers on either side of the tributaries. Invasive trees that were growing in the creek and displacing native vegetation, particularly fig (Ficus carica) and Chinese tallow (Sapium sebiferum), were controlled with careful herbicide applications.

In addition to the restoration and planting efforts, a 4,400 foot long asphalt trail was sited along the creeks, allowing visitors to complete a 1.5 mile loop within the park. Ten interpretive stops along the new trail provide visitors with information about local ecology.

A patch of recently-planted goldenrod (Euthamia occidentalis) blooms in late summer with young native trees and shrubs growing in Tubex tubes in background.

New asphalt trail being installed along the middle fork of Horse Creek.

The young native trees and shrubs planted on either side of the new trails in Centennial Park will grow and eventually provide shade for park users.

Send us an email